Be scam aware this July! 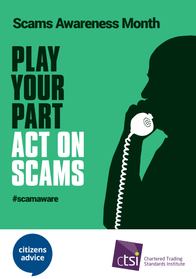 We’re spreading the word about scams to help stop more people across Lichfield and Burntwood from being conned.

The charity is taking part in Scams Awareness Month, a campaign encouraging people to report and talk about scams that runs throughout July.

The drive to get more people reporting scams comes as national Citizens Advice reveals a 17% increase in people being scammed after purchasing ‘phantom goods’.

The scam works by conning shoppers into buying high value items, namely online, which turn out not to exist. The average loss was £1,100.

People were most likely to be scammed when buying cars, flights and furniture. Other ‘phantom goods’ included jewellery and cameras.

The Citizens Advice consumer service received 555 reports of ‘phantom goods’ scams during January and March 2017, compared with 495 over the same period the year before.

"Being scammed can ruin people’s finances. People can lose significant amounts from phantom good scams, so it’s important they don’t rush into online purchases until they’re sure seller is genuine. During Scams Awareness Month we’re encouraging people to play their part in preventing scams by reporting them and telling others about them. People can also come and see us or call the Citizens Advice consumer service if they want advice on whether something is a genuine deal or a scam, or for advice if they have been scammed.”

Getting advice and report scams: